A flock of black Swans

Market cycles can be forecast, but with limited reliability. The extremities of market peaks, however, are driven by ‘black swans’ – developments and events that happen only rarely, tend to catch society by surprise, and have a transformative impact around the globe.

While expecting the unexpected is the basic job description of a shipowner, the flock of black swans that have descended upon global maritime trade in recent months shows how we are living through extraordinary times. 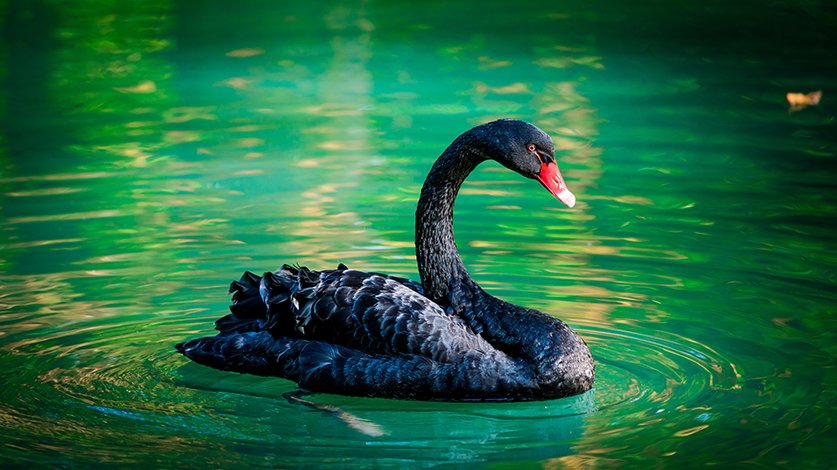 The accumulation of disruption and supply chain shocks are transforming global trade fundamentally.

The pandemic disrupted logistics networks across all sectors. The shipping industry struggled as containers, vessels, and their crews were caught up in wrong locations, backlogs, port delays, and sudden changes in voyage plans. Further waves of lockdowns, particularly prevalent in China, added more confusion and doubt about whether standard ‘just-in-time’ practice was still fit for purpose.

The risk of ‘stagflation’ has already been spelled out by the World Bank, which in June 2022 predicted a protracted period of feeble growth and elevated inflation. Global growth is expected to slump from 5.7% in 2021 to 2.9% in 2022 — significantly lower than the 4.1% the bank was anticipating in January. (Source: Global Economic Prospects (worldbank.org))

ow all eyes are on the war in Ukraine, which is compounding the unresolved issues and magnifying the slowdown in the global economy in the process. Confronted with trade restrictions and logistical challenges, the cost of oil and gas has increased as the world scrambles for energy security in a market that was already undersupplied prior to the war.

As Europe steadily dials back its Russian imports, cut-price Russian crude is increasingly heading to Asia, India, Turkey, and potentially even Latin America as pragmatism trumps politics in the rush to stave off fuel price inflation. Pre-invasion, Russia exported between 4.5m and 4.7m bpd of crude, of which about 45% was consumed by Europe and a further 300,000 bpd was shipped to the US, mainly fuel oil. (Source: Oil Market and Russian Supply – Russian supplies to global energy markets – Analysis - IEA)

There are consequences to these changes that require greater levels of risk management from the shipping sector.

The displacement of this trade could expand the fleet of tankers engaged in transporting Western-sanctioned crude to more than 400 vessels if Russian-linked ships are added to the vessels already known to be engaged in Iranian and Venezuelan trades.

Lloyd’s List has been using Lloyd’s List Intelligence data to track a fleet of over 200 tankers involved in the illicit carriage of Iranian or Venezuelan oil over the past few years. If Russian owned, operated or flagged tankers are used to load Russian crude and added to the so-called shadow or subterfuge fleet of tankers, that fleet could expand significantly.

These sanctions-busting tactics first deployed by Iranian and Chinese-linked vessels during 2019 have been copied and extended to Venezuelan flows in the last 18 months.

The war is also changing trade patterns that will not be quickly reversed.

Disrupted regional logistics, the halting of port operations in Ukraine, the destruction of infrastructure, trade restrictions, increased insurance costs and higher fuel prices, are only the immediate consequences visible to all. The search for alternate trade routes for Ukrainian exports, particularly grain, has resulted in fewer shipments over longer distances and ultimately to higher food prices globally.

The shift in grain trading patterns is reflected in port calls by dry bulk vessels in the Black Sea, where ports that normally serve more than 90% of Ukrainian grain as overseas shipments have remained shuttered by the conflict. (Source: IRC International Rescue Committee  Russian blockade of Ukraine food exports in Black Sea port will have deadly consequences for hunger-stricken countries, warns IRC | International Rescue Committee (IRC))

Our data has revealed how overseas grain dispatches have been limited to deliveries via Western borders, by rail, as well as through the small ports on the Danube River. Departures in May 2022 from Ukraine’s Danube ports, which border Romania and are the only operating ports under Ukrainian control, quadrupled as Ukraine tried to find viable routes to export grain in the face of Russia’s naval blockade. (Source: Ukraine’s Danube ports increase activity to boost grain trade | Lloyd's List) 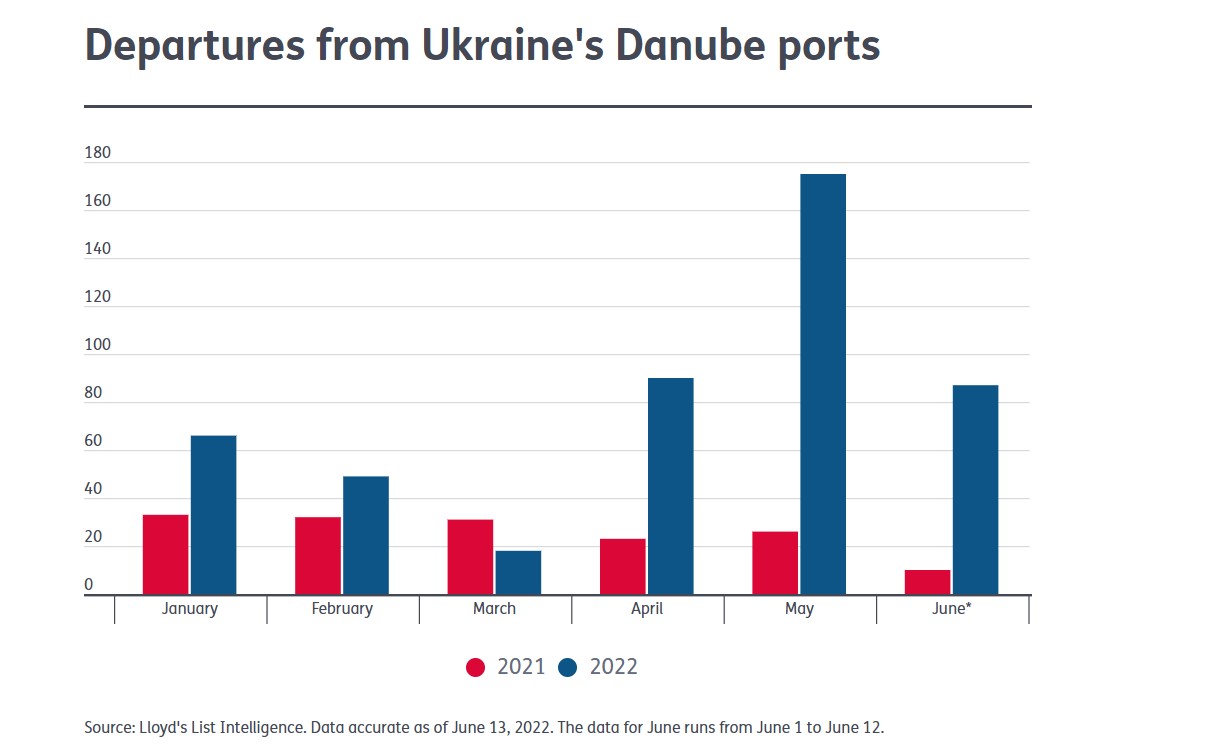 The high cost of uncertainty

The conflict in Ukraine is putting further upward pressure on the international prices of energy and primary commodities. In the short term that means higher trade values and marginally lower trade volumes, but longer term these shifts are only contributing to a more costly and unpredictable global trading and shipping environment.

But the war is only one aspect of a much wider confluence of factors driving uncertainty for global seaborne trade.

The cost of capital is moving up and inflation is looming large for the post-pandemic economy. Globalisation’s engine is stalling. China’s economy is going to struggle to hit 5% this year and oil imports may fall again, having dipped in 2021 — the first contraction for 20 years. And then there is the supply chain crunch, which is far from over. COVID-19 mitigation measures may continue to create supply disruptions and global economic uncertainties are likely to make investments riskier.

Add in long-term trends seeking to bolster trade resilience by shortening supply chains and diversifying suppliers, and you have the looming danger that that the pursuit of security will morph into rampant protectionism. Factor in the uncertainty surrounding trade agreements seeking to catalyse intra-regional trade, the all-encompassing transition towards a greener economy delaying decisions and rising concerns for debt sustainability and it becomes clear that there is little in the way of predictability outcomes on the horizon.

Uncertainty can of course act as a poison for the global economic terms. Without knowing what lies ahead, firms delay making potentially profitable investments and hiring new workers with all the negative consequences that implies. But amid the restructuring, recalibration and the requirement to redefine several aspects of existing business models, there lie opportunities for those able to navigate and mitigate the risk.

Black swans are, by definition, unpredictable. But one of the biggest lessons from the covid-19 pandemic and the subsequent flurry of market disruptions that has followed has been the folly of ignoring warnings about highly likely, high-impact risks that are a matter of when, not if.

Anyone anticipating a return to ‘normal’ is looking in the wrong direction. The challenge is to concentrate on the consequences of black swans, which can be known, rather than on the probability that they will occur, which can't. The most astute players in maritime have always understood that shipping’s future fortunes rests on factors that have little to do with ships.

Successful risk management is about paying more attention to well-known but poorly managed risks. Uncertainty, as the cliché has it, is the only certainty we can rely on.

In the face of this new landscape, businesses across the globe are responding by turning to the best possible data and analytics that will help them make confident decisions around risk and compliance. 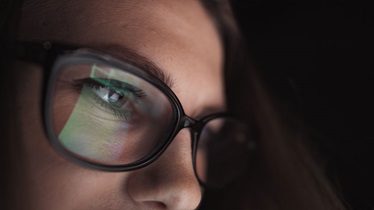 On the Trail of Ukrainian Grain

Making sense of a spider web of digital information, false leads and anecdotes involves persistence, intuition and the ability to dive deep into the world’s preeminent store of marine data.
Read More