Below the Surface: Ownership and Risk


The unique structure of the maritime industry means that establishing who controls – or owns - what in the world of shipping can be extremely challenging. Because of the war in Ukraine, and Western efforts to lock out Russian energy exports, the issue is now under the spotlight as never before.

To help uncover the finer details of who is responsible for vessels and the impact of their activities, and how, we identify several different levels of ‘ownership’, ‘operators’ and ‘managers’ connected with a vessel. Some of these are straightforward to define and identify. For example, the Registered Owner is the legal title holder of a vessel and listed on the ship’s registry document. This is the entity that compliance officers screen first.

The Technical Manager and ISM Manager, responsible for the vessel’s safety compliance and maintenance, are entities that sometimes indicate affiliations between vessels where ultimate ownership structures are obscure or unknown.

Less straightforward is identifying the operating and owning structures directly linked to the vessel’s Registered Owner. Usually, a vessel is owned by a single ship company (the Registered Owner), registered in an offshore location for secrecy or tax relief purposes. This does increase the difficulty in finding information on the true identity of the vessel’s ultimate owner -- the Beneficial Owner. The Beneficial Owner is, in our studied opinion, who or what may be the ultimate owning entity, controlling party or representative of the vessel. It could be either an individual, company, group or an organisation.

Commercial Operators are responsible for the commercial direction of a ship, including its employment, which would include the type of charter arrangement such as voyage charter, time charter or bareboat charter the vessel operates on. When the vessel is chartered out on voyage, period or bareboat charter terms it is considered to be operated by a Third-Party Operator, although the level of control held by the charterer differs between the three arrangements.

In the case of bareboat charters and ship leasing arrangements, identifying the Ultimate Beneficial Owner adds another layer of complexity. An interesting example is in the case of a bank or other institution funding the acquisition of a vessel - this entity will be the Beneficial Owner, as the direct legal owner of the Registered Owner entity. Sometimes the same entity is displayed as the Commercial Operator too, or a leasing arm/subsidiary of the group may take that role instead. Then we assume that there is a Third Party Operator - usually the entity that ordered the vessel operating on a bareboat charter or sale and leaseback arrangement - that supersedes the Commercial Operator regarding the vessel's day to day management, as the Bank will be unlikely to do so.

The country of registration of the ownership or management entities may also have a significant impact on the vessel’s commercial profile. For example, there is a combined chemical and oil tanker, NS Stella (IMO 9309588), built in Croatia in 2005 and sailing under the flag of Liberia – one of the most popular registries. The Registered Owner is Millwood Shipping Navigations SA, also based in that country, but the Commercial Operator is Novoship (UK) Ltd, a London-based entity, while the Technical and ISM Managers are both located in Dubai, UAE. This complex owning and operating structure stretches across Europe and the Middle East, reflecting the diverse interests in the vessel as a valuable and busy asset delivering tons of materials around the globe. But delving a bit deeper, our research and analysis showed that the ultimate Beneficial Owner of the vessel is PAO Sovcomflot (PJSC ‘Modern Commercial Fleet’) based in St Petersburg, Russia.

This last fact is significant, because many jurisdictions have banned Russian-owned vessels from their ports in response to the invasion of Ukraine. This important detail of Beneficial Ownership, which is not necessarily to be found within the widely available records of the vessel, is precisely what would prevent businesses in those jurisdictions from engaging with it and risk breaching the sanctions that are in effect.

But not all jurisdictions follow the same guidelines. The EU has only banned Russian flagged vessels – the flag state under which the vessels are sailing – which is an entirely different matter from the registered owner-place of incorporation, or the place of domicile for its Beneficial Ownership. What this means in practice is that the NS Stella can call at Piraeus Greece, but not Southampton UK, and might be denied entry to Los Angeles USA. To add to the confusion, some countries have banned vessels with Russian Registered Owners but not explicitly extended that to include ships with Russian Beneficial Owners.

Despite calls by inter-governmental organizations like the Financial Action Task Force (FATF) for global Beneficial Ownership registers to help combat money laundering, implementation is falling far short of ambition and remain a distant prospect in less regulated jurisdictions.  Even when a register is properly maintained it is often not publicly accessible, or the beneficial owners are hidden behind further layers of offshore registered companies.

Convoluted ownership structures don’t just make it difficult to enforce sanctions; they also undermine efforts to combat money laundering and terrorist financing, and make it difficult to hold vessels to account in the event of major marine casualties and other incidents at sea such as crew abandonment, major pollution events and other illicit activity.

Layers of bewildering complexity and hidden detail are issues Sebastian Villyn, Head of Risk & Compliance, Data Analytics and Product at Lloyd’s List Intelligence, deals with every day. “We are increasingly seeing vessels owned by single-ship owning entities registered in jurisdictions with limited or no beneficial ownership transparency, serviced and managed by opaque outfits in key shipping hubs like the Middle East, where the management outfits claim to have no knowledge of who the owners of the vessels are, despite often managing two or three that can clearly be identified as belonging to the same group. Deep dives into company filings and reports often find company secretaries and agents linking back to one another and shareholders in jurisdictions which are either directly or indirectly subject to sanctions, such as in the case of Russia.”

How does this confusion come about? In part it reflects the fragmented, globalised nature of the sector, with ships operating across multiple jurisdictions, with a host of different entities interacting along the way.

It is also the result of culture: shipping is an ancient industry where old habits have evolved into business norms. Until the arrival of earth observation satellites, ships operated out of sight most of the time. The confusion over hidden details today is perhaps the legacy of this millennia-old industry that has worked mainly beyond the horizon and out of sight.

Ultimately, of course, it is about money: how to evade the costs that come with regulation, maximize returns on slim margins or conjure a profit from a crisis. For two years we have been documenting the emergence of a ‘zombie’ fleet of geriatric tankers moving Iranian and Venezuelan oil to China and other destinations in defiance of US embargoes.  Politics created an opportunity; cold-hearted pragmatists exploited it. Our Thought Leadership and other blogs have been covering this evolving practice in Sanctions Skirting Secrets of Shipping and Analysing Deceptive Practices In Shipping

Much the same is happening today with Russian energy.  Despite the concerted efforts of Western countries, including bans on insurance and reinsurance, Russia continues to ship 1.5m barrels of crude daily – approximately the same volume as before the conflict. Our analysts have illustrated how Russian oil is diverted to Asia from Europe by vessels with ownership linked to entities that are all registered at the same address in Dalian, China. Using the well-established model of Iranian and Venezuelan ship-to-ship transfers, they have created a new hub for transferring Russian oil in a location about 860 nautical miles west of Portugal, as we exploed in this article: Anonymous Chinese shipowner spends $376m on tankers for Russian STS hub

With the increase in ship-to-ship transfers in open water there is not only heighted risk of vessel damage, ruptures and spills. All the ships are aged 15 years or older, moving to the end of their typical lifespan and precluding them from chartering by most oil majors.

As events continually unfold that create new patterns of behaviour that can be linked to certain vessel owners and managers, it is increasingly important for businesses to have solid and reliable ownership data to inform their decisions.

Read more about ownership risk in our blog Russia, Sanctions, Ship-to-Ship Scenarios or find out how our Advanced Risk & Compliance service helps professionals spot and assess risk around vessel movements and status by clicking on the links below. 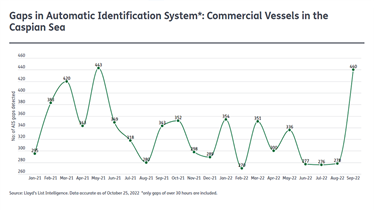 Seaborne trade between Iran and Russia via the Caspian Sea, a suspected route for weapons shipments, is increasing and ships plying the trade are routinely doing so with Automatic Identification System (AIS) signals turned off.
Read More